Our Mind & Body Consultants team had a fantastic night in Auckland recently, celebrating the 21st birthday of the service.

About 80 guests attended, all of whom had been involved in helping the organisation to evolve and grow over the years.

Mind & Body Consultants began in 1998, when Jim Burdett approached the Auckland District Health Board with the idea of professionalising consumer advisor roles. The organisation has been a key part of New Zealand’s mental health landscape since.

In 2006, another peer support contract was gained with Waitemata District Health Board, followed closely in 2007 by the establishment of the Christchurch peer support service. Mind & Body Consultants became part of the Emerge Aotearoa Group when we formed in 2015.

Today, the team of about 30 kaimahi (plus Bubba, Shadow and Bailey the Pet Peer Support dogs)  work in Auckland, Christchurch, Capital and Coast, and Waitemata delivering peer advocacy and support. They also deliver the Like Minds education programmes, Two+ reThink, for the education and housing sectors, with support from Vaka Tautua and Mahitahi Trust.

Thank you to everyone who helped make the 21st birthday celebrations such a success, including MC Brody Runga, guest speaker Mary O’Hagan, our Group CE Barbara Disley and Jim Burdett. 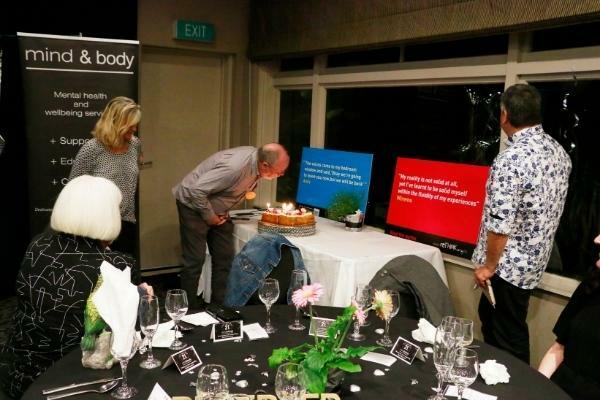